The city of Redding makes a perfect base of operations for educational tours in one of the most beautiful regions of Northern California. Teachers can provide their students with an unforgettable experience that includes geological treasures, pristine mountain scenery and the rich history of the American West. But it’s not all learning—opportunities for pure recreation await as well. 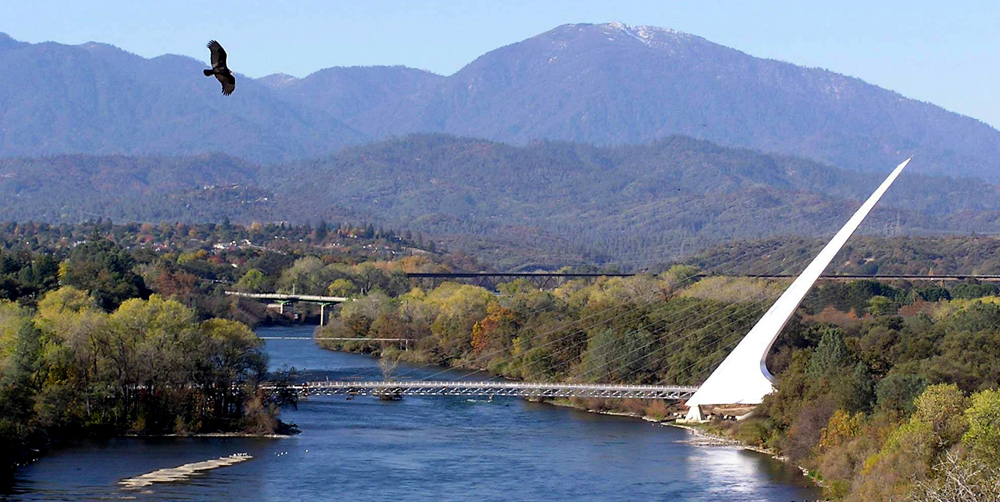 What better way to begin your tour than walking across the famous Sundial Bridge right in the center of Redding? Providing pedestrian and bicycle access across the Sacramento River, the 710-foot long suspension bridge boasts a 217-foot tall mast that creates one of the largest working sundials in the world. The pylon points due north at a cantilevered angle, casting its shadow on a large dial plate on the bridge’s north end. An environmentally conscious structure, the architectural marvel never touches the water, thus minimizing impact on the salmon-spawning grounds in the river. 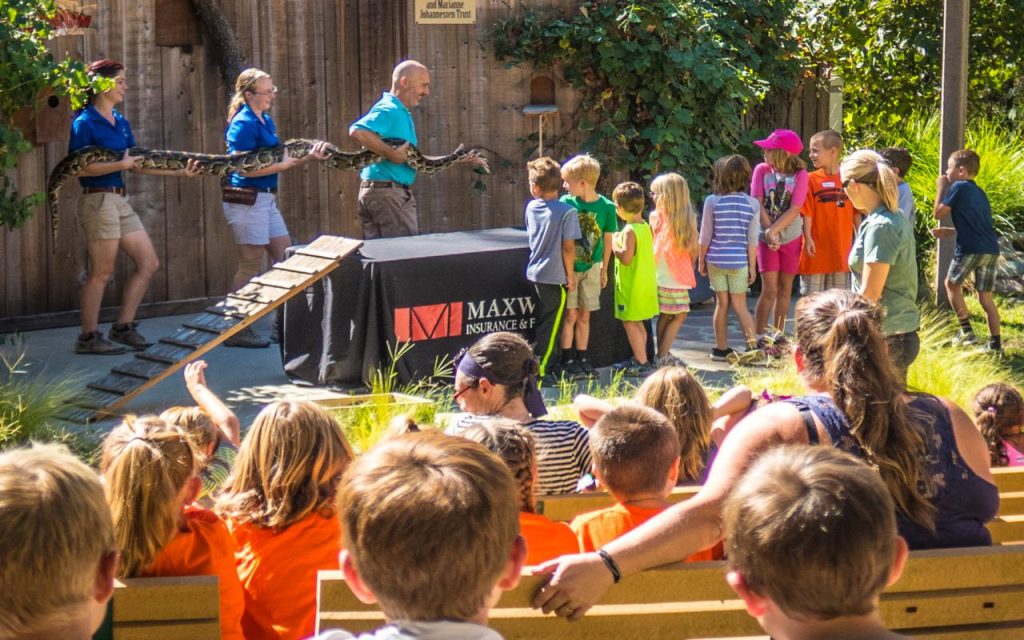 Designed by noted Spanish architect Santiago Calatrava, the glass-decked bridge links the two campuses of 300-acre Turtle Bay Exploration Park, which has plenty to keep your student group engaged. It includes an aquarium, botanical gardens, a seasonal butterfly house and a museum with historical dioramas, Native American displays, science experiments and art exhibits. Students will especially like the Parrot Playhouse, a walk-through aviary populated by colorful Australian lorikeets that perch on your head and arms in exchange for a sip from a cup of nectar. The aviary is part of Paul Bunyan’s Forest Camp, which has animal exhibits, logging and ecology displays, and a working model of the Sacramento River. Educational “Walk on the Wild Side” wildlife shows from May to August explore animal behaviors. 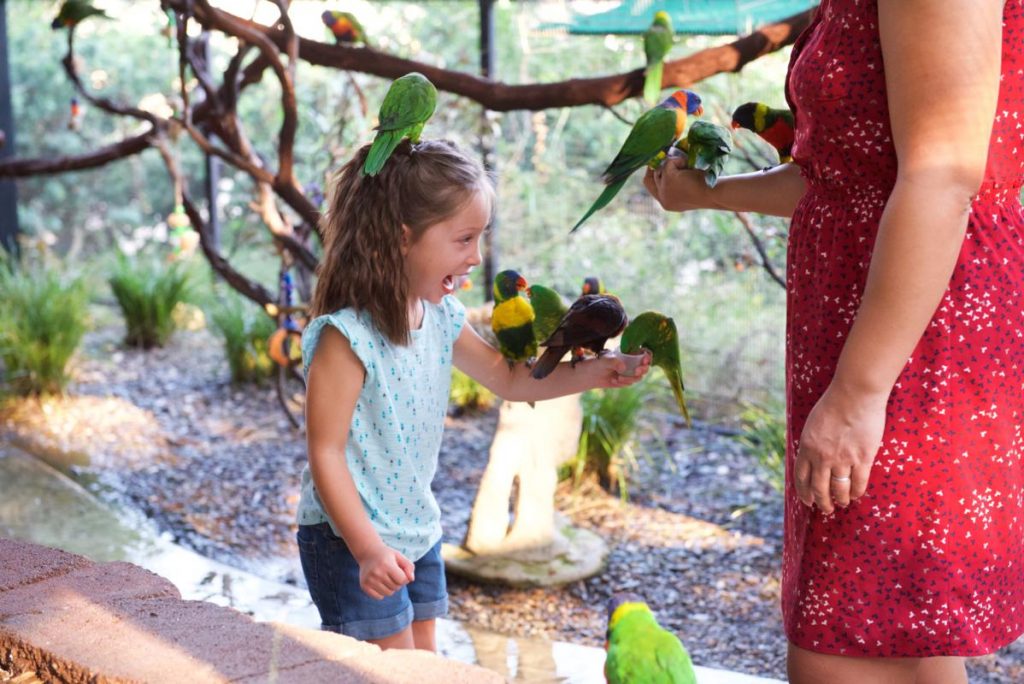 Students can learn about plant life around the world at Turtle Bay’s McConnell Arboretum and Botanical Gardens, which include landscapes representative of five Mediterranean climate zones—the Mediterranean Basin, South Africa, Chile, southern and western Australia, and California west of the Sierra Nevada. Also of interest are medicinal and butterfly gardens. 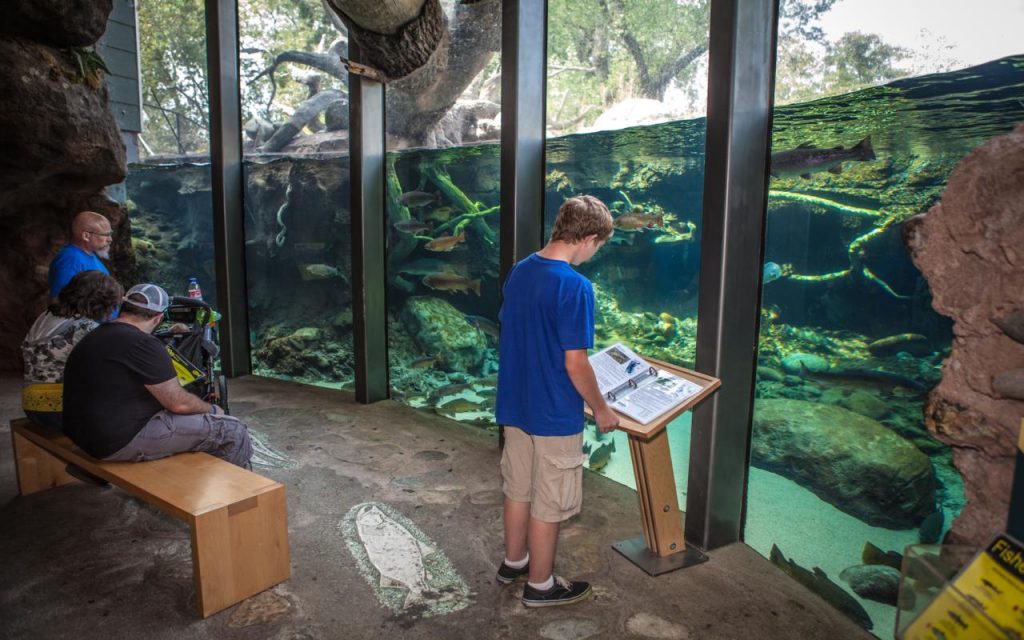 An ambitious schedule of changing exhibits and special events means there’s always something new to see at Turtle Bay Exploration Park. “Material Culture: Form, Function, and Fashion,” a touchy-feely exhibit on textiles running from Oct. 21, 2017, to Jan. 7, 2018, examines everyday items we use, from backpacks to bath towels. The exhibition goes back into pre-history, takes a journey down the Silk Road, examines the roots of the Industrial Revolution, looks at the concept of fashion and takes a peek at the future of fabric. The “World’s Largest Dinosaurs” exhibition is scheduled for May 5 to Sept. 9, 2018. Turtle Bay offers a brochure full of field trip ideas and programs. 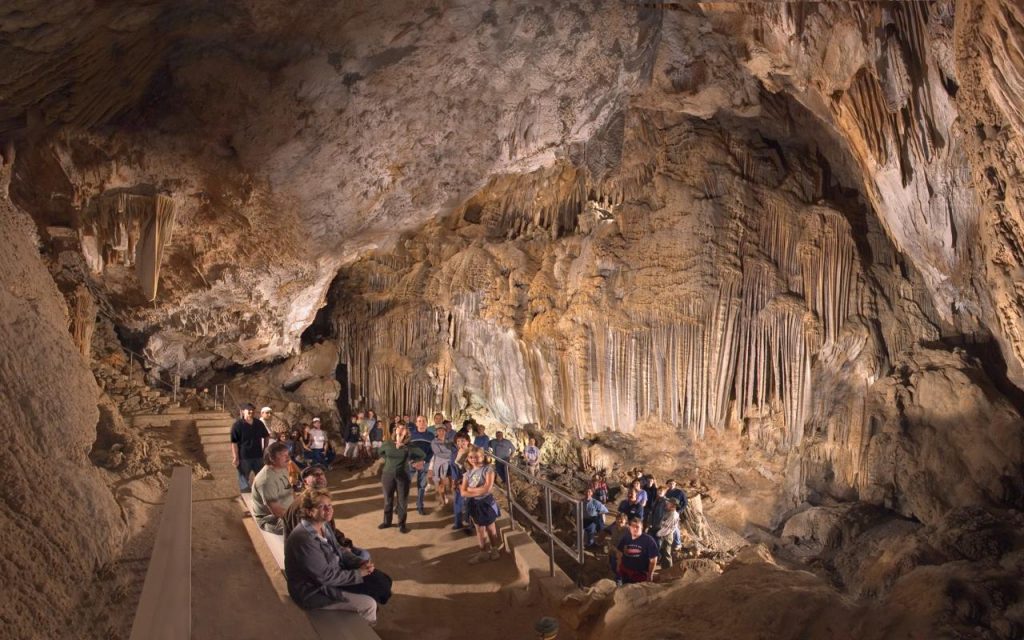 Head north of Redding for a visit to Lake Shasta Caverns National Natural Landmark. A scenic 10-minute catamaran cruise across Shasta Lake followed by a short bus ride through the woods will bring your group to the cave entrance. On a tour through the limestone chambers with their enormous stalagmites and sparkling reflecting pools, guides will discuss the caves’ history, geology and microclimates. The temperature is a constant 58 degrees. 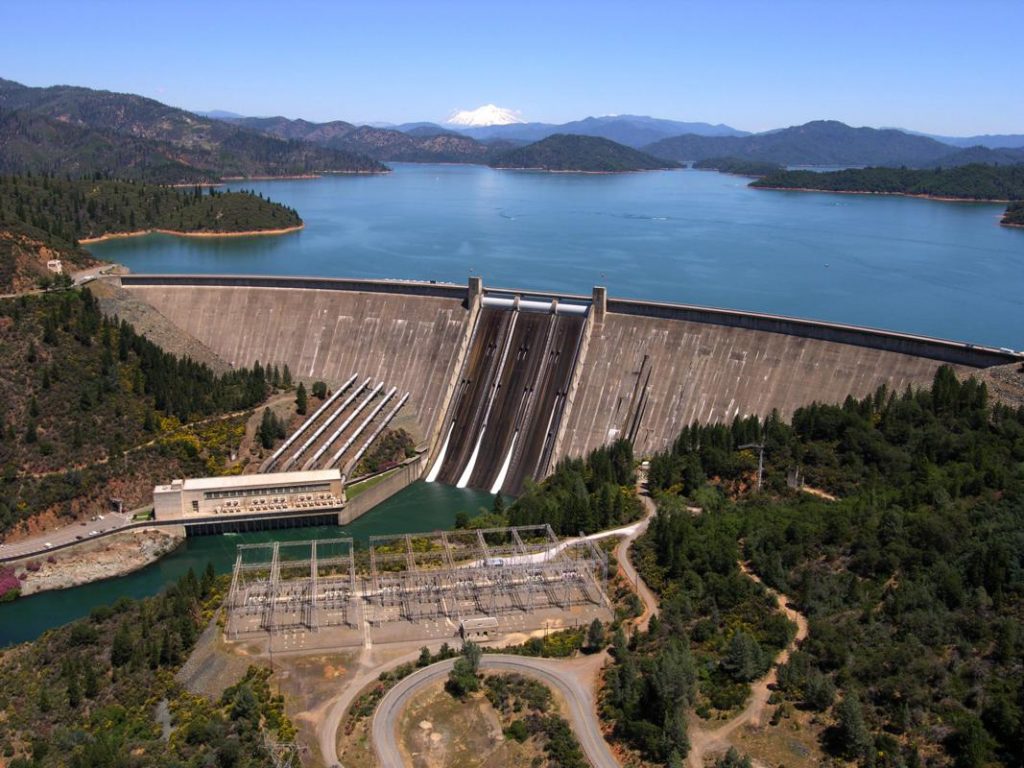 A free tour of the Sacramento River’s Shasta Dam offers students a valuable lesson in ecology, long-term water storage, flood control and hydroelectricity. At 602 feet high, Shasta Dam is one of the tallest dams in the United States, and, upon completion in 1945 only the Hoover Dam was taller. The dam created Shasta Lake, the largest reservoir in California with 370 miles of shoreline. Its spillways are three times the height of Niagara Falls. A 428-foot elevator ride to the dam’s base will reward students with a visit to the powerhouse and galleries, highlighting energy production in Northern California. Teachers can arrange for a 30-minute video on California water usage to be shown in the visitor center.

Whiskeytown National Recreation Area, a few miles west of Redding, is a great place for your students to unwind. On crystal-clear Whiskeytown Lake, they can chill out on sandy beaches, try stand-up paddleboarding or take a free, ranger-led kayak tour. Other ranger-guided activities include hiking to waterfalls; one trail leads to Whiskeytown Falls, a 220-foot cascade “rediscovered” in 2004 after being a secret find known only to a few locals. For school groups, the park has ranger-led programs that focus on science and California history, including a gold rush lesson featuring a mine visit and panning for gold.

California gold rush history also comes alive for student groups at Shasta State Historic Park, another attraction just minutes from Redding. The mining boomtown of Shasta, once known as the “Queen City of the North,” stood on this site and prospered for over 40 years from 1850-1890; a few half-ruined, brick buildings remain. Of chief interest to visiting school groups is the restored 1861 Shasta County Courthouse, now filled with exhibits and a collection of California artwork spanning 100 years. Students will see the restored courtroom, jail and gallows, and they’ll meet a storytelling “ghost” still locked in the jail. Trails on the 19-acre site lead to the Pioneer Barn with 1800s farming implements and a cemetery. The park’s website offers a downloadable teacher’s guide to this historical attraction. 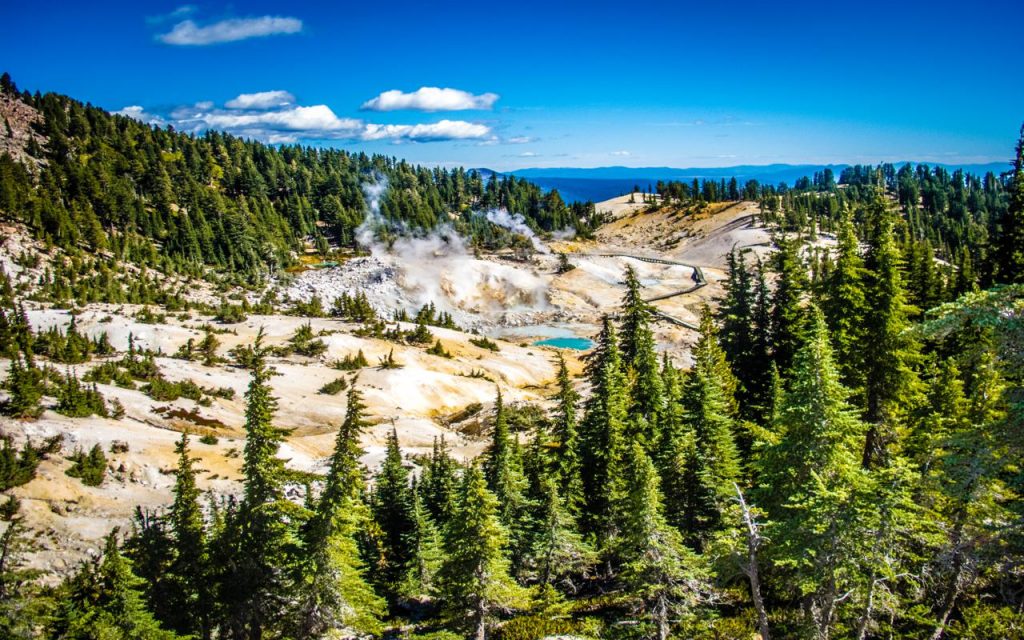 Lassen Volcanic National Park, one of the most active hydrothermal areas in the nation, captivates student groups with gurgling mud pots, lava beds, boiling springs and roaring steam vents called fumaroles. It is the only national park in the world with all four types of volcano—plug dome, shield, cinder cone and strato. Lassen Peak, the park’s centerpiece, erupted in 1915 and had minor eruptions for several years afterwards but has been quiet since 1921. Until Mount St. Helens blew in 1980, Lassen’s eruption was the most recent volcanic explosion in the lower 48 states.

A 21-minute film in Lassen’s Visitor Center provides an overview of the park, with its lava flows, wrecked mountains and devastated land. Hiking trails with boardwalks showcase some of the hydrothermal features, as does the main park road. The park is also home to clear mountain lakes, wildflower meadows, spectacular waterfalls and a museum. Ranger walks and talks are available, with interpretive snowshoe walks offered in winter. 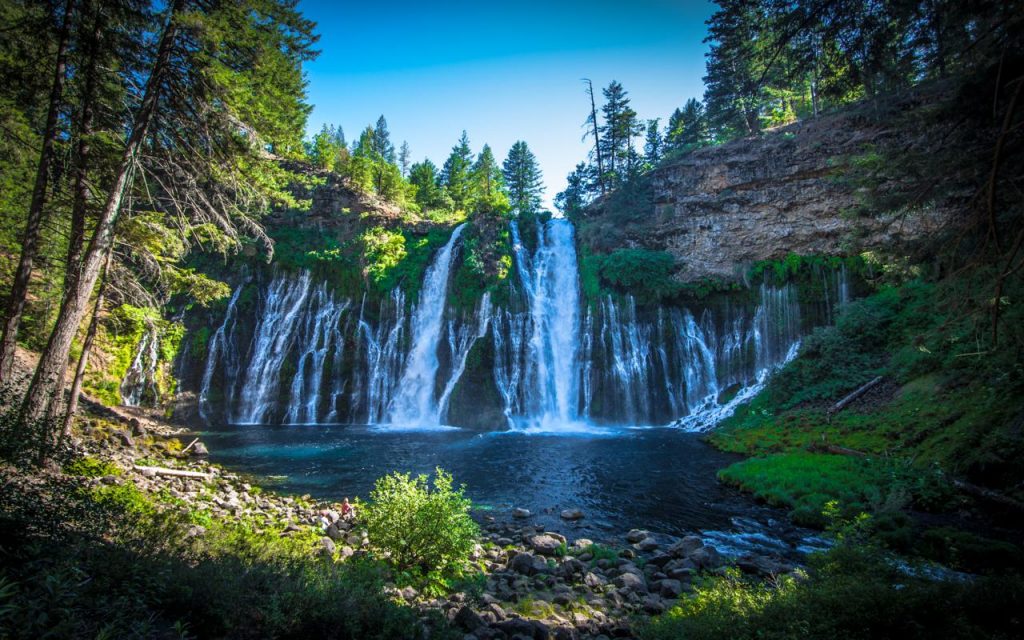 McArthur-Burney Falls State Memorial Park is another awe-inspiring spot close to Redding. It is home to 129-foot Burney Falls. One of the most beautiful waterfalls in the state, the cascade was described by Theodore Roosevelt as the “Eighth Wonder of the World.” This amazing fall is gushing 100 million gallons of water a day and does so all year due to the fact that it is fed by underground springs. The falls can be seen from the look out or for the breathtaking view it’s a short, easy hike to the base, and an optional 1.3-mile trail circles the falls. The park is the perfect setting for a group picnic.

Redding, with its wide variety of dining and lodging choices, serves as the ideal hub for tour groups exploring all this region has to offer. Overnight accommodations at all price levels welcome groups big and small. A list of group-friendly properties can be found under the “Groups” tab at www.visitredding.com.

Redding and the Shasta Cascade region, a glorious outdoor playground and stimulating classroom all in one, provide an irresistible setting for student groups looking to explore the wonders of Mother Nature and the culture of California