Student Groups are Making Their Own History in Gettysburg 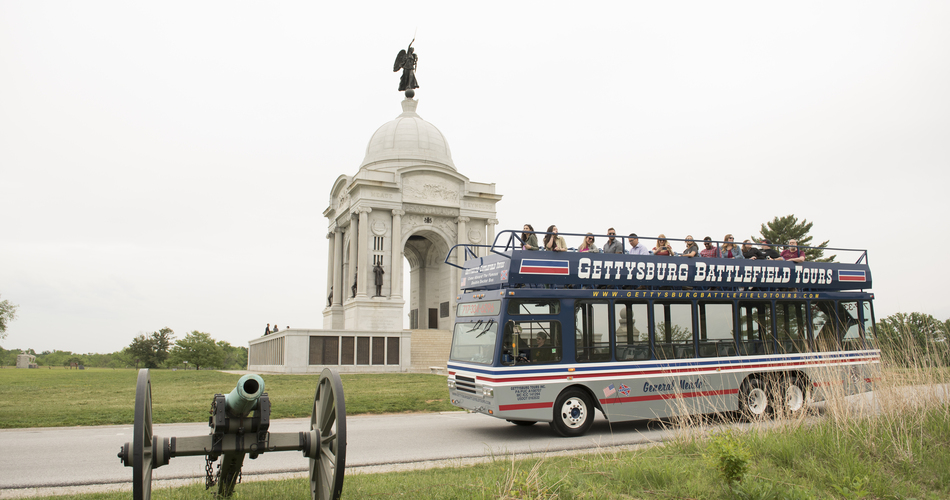 Arrive at Gettysburg National Military Park Museum & Visitor Center, the official start to your Gettysburg experience. Begin with the film A New Birth of Freedom to gain insight into the events that began with the first shots through Lincoln’s address. The Gettysburg Cyclorama will plunge you into the sights and sounds of Pickett’s Charge. The museum’s interactive exhibits and authentic artifacts display the war and its damage.

Tour the Gettysburg National Military Park with a Licensed Battlefield Guide exploring the battle’s most significant and decisive sites. For three days in 1863, forces of the Union and Confederacy met in what would be a turning point of the American Civil War. Stops at Little Roundtop, Devil’s Den, Culp’s Hill, the Wheatfield and other sites help understand what happened here and the impact it has today.

Dinner tonight is at Dobbin House Tavern. Established in 1776, it is the oldest structure in Gettysburg and listed on the National Register of Historic Places. Student groups are welcome to enjoy generous sandwiches and entrees.

After dinner, depart Dobbin House Tavern for a short walk past the Soldiers National Cemetery and the former Hall of Presidents & First Ladies Museum. Soon you’ll be entering one of the most haunted buildings in the area for the Haunted Orphanage Tour. It’s said that spirits have lingered throughout the building for more than 150 years.

Breakfast at your hotel and depart for the home and farm of the 34th President of the United States.

Arrive at the Eisenhower National Historic Site.The 650.5 acres served as a weekend retreat for the president and first lady and was a favorite meeting place with world leaders during the turbulent Cold War. Join a National Park Service Ranger and explore the only home Dwight and Mamie Eisenhower ever owned. You’ll walk the grounds of the site, touring the home and hearing stories of the Eisenhower family and their relevancy for us today.

Enjoy a catered lunch on the grounds from Biggerstaff’s Catering with lunch options sure to fit even the pickiest appetite.

It’s on to the Seminary Ridge Museum & Education Center and a look at Mending the Wounded. Approximately 700,000 lives were lost during the Civil War and thousands more were left with major injuries. This STEM lesson explores the experiences of surgeons, nurses and the wounded soldiers. Learn the advances in medicine that are still used today and the knowledge of the true human costs of war.

Dinner tonight is at the area’s new food hall, Savorhood Gettysburg. More than a half dozen casual dining options are already on site. After dinner find some sweet treats at Mister Ed’s Elephant Museum & Candy Emporium.

Conclude a fun day by touring Shriver House Museum. Much has been written about the historic military maneuvers. This location tells the story of civilians George and Hattie Shriver and their two daughters and the impact this historic battle had on their lives.

For breakfast, check out and depart to an interesting Farm Park.

Welcome to the Historic Farnsworth House Inn circa 1810. Confederate sharpshooters sheltered in the house, and after the conflict it served as a hospital. Enjoy some wonderful period fare for lunch followed by a performance of a Day in the Life of a Civil War Soldier.

Depart Gettysburg with solid memories. You just made your own history