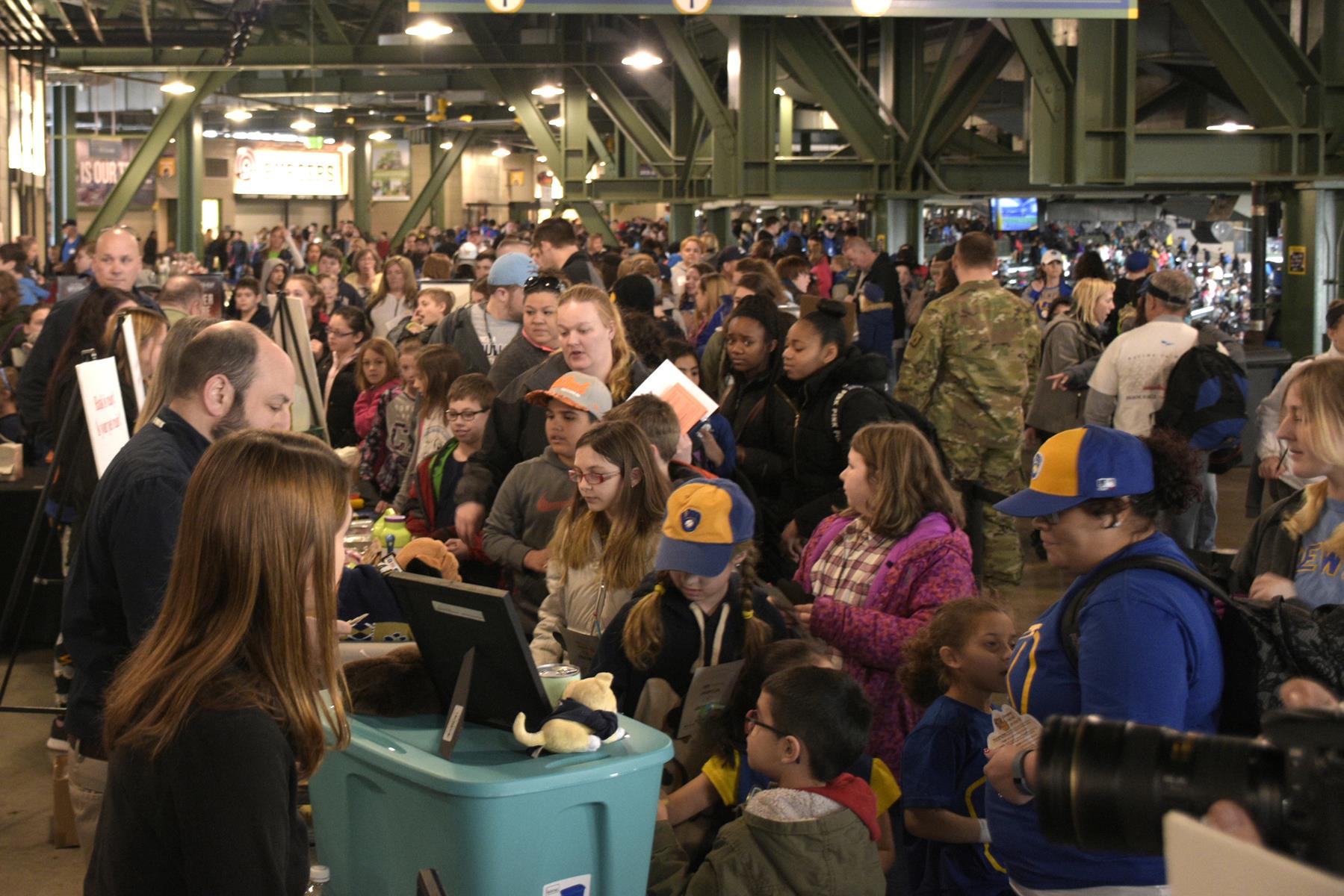 A visit to your local Major League Baseball ballpark often offers a home run for student groups. Historic stadiums, ample day games and exciting action are a time-honored way to reward students for a job well-done. However, baseball offers much more than meets the eye. For the past 20 years, some of the sport’s greatest minds have integrated advanced statistics, physics and health science to revolutionize the global athletics industry and maximize performance. Made famous in Michael Lewis’ famous 2003 book Moneyball, this aspect of baseball should be tantalizing to teachers who want to add a STEM-centric element to their next baseball excursion. Fortunately, many MLB teams offer education days and in-classroom programs to create an unforgettable experience that blends ballpark fun and educational engagement. Division-by-division, here are the league’s best student programs. 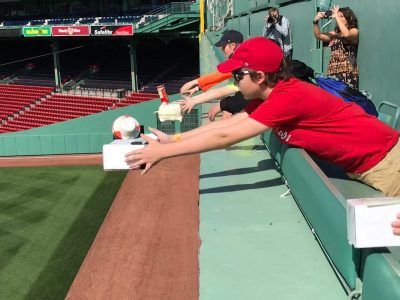 Besides playing in historic Fenway Park and winning the most World Series in the 21st century, the Boston Red Sox also host the twice-annual STEM Education Days (May and September). Participants are provided with Common Core-approved workbooks that detail the physics of launch angle, wind speed and ballpark dimensions before embarking on a tour of Fenway Park and dropping an egg from the famous Green Monster outfield wall to test gravity and surface resistance. Depending on the date, students can participate in a Q&A session that welcomes either NASA astronauts or engineers from Boston-based iRobot before taking in a matinee game.

Teachers looking for a classroom-based baseball experience can participate in the Baltimore Orioles’ Bird on a STEM program, a partnership with Maryland Public Schools. Lesson plans will prompt students to consider how local climate affects ball flight and player performance and how team statisticians interpret Statcast data. The program also allows school groups to tour Camden Yards and speak with an agronomist to learn how fields are maintained during an 81-game home season.

The Atlanta Braves’ Science of Baseball Program provides teachers lesson plans to explain the physics behind a fastball, the geometry of a baseball field and the statistical analysis of baseball records. Once students complete the program, they are invited to an excursion to the new SunTrust Park to meet a Braves player and attend a “STEM Showcase,” which provides real-time scientific factoids and interactive activities as the game takes place. Southeastern students can also participate in the Miami Marlins’ STEAM Day. when Marlins Park is transformed into a science fair for students to meet a South Florida meteorologist, launch catapults from the pitchers mound and watch chemical explosions from the home dugout. 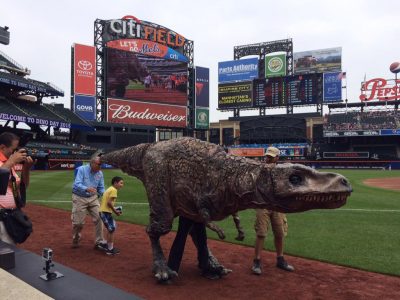 Eastern Pennsylvania students interested in weather and physics should attend the Philadelphia Phillies’ annual Weather Education Day at Citizens Bank Park. School groups will enter down the first or third base line before receiving a activity pack and Phillies rally towel. Groups can then interact with  meteorologists from NBC 10 and scientists from the Franklin Institute (one of the oldest research labs in the nation) before taking in an entertaining evening game. Have students with a knack for paleontology? The New York Mets’ Dinosaur Education Days are a comprehensive experience that transports Citi Field back to the Jurassic Period. Students receive a introduction along the warning track and can meet the famous Mr. Met before embarking on a tour of several Field Station Dinosaurs Paleontologist zones that include a video quiz and examination of dinosaurs that once populated New York City’s tri-state area. Afterwards, groups will take in a Mets game (with some surprising dino visitors). 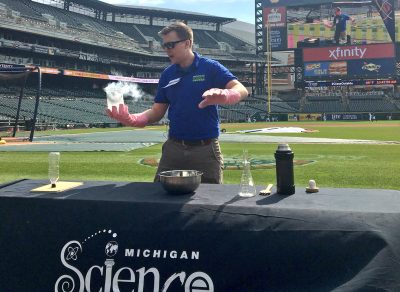 An excellent supplement to a Michigan Science Center Visit or tour of the Ford River Rogue Complex, Comerica Park (home of the Detroit Tigers) hosts a diverse slate of programming called the Class Outside Series. Through programs like STEAM Day, Weather Day or even CSI: Forensic Science Day, students are given the opportunity to listen to speakers, participate in interactive educational experiences and watch the Detroit Tigers play. 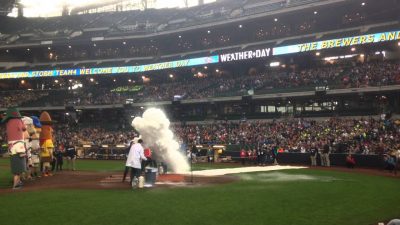 Every April, Miller Park (home to the Milwaukee Brewers) in Milwaukee hosts Weather Day. Booths staffed by the Milwaukee Public Museum, National Weather Service, WE Energies and more can be found around the ballpark before a show in the infield demonstrates how electric power grids operates, weather balloons launch and tornado are formed. Current Brewers players and personnel will stop by to sign autographs and participate in the demonstrations. Weather Day can also be found at the St. Louis Cardinals’ Busch Stadium. Hosted in conjunction with local TV news outlets and the St. Louis Science Center, the event includes lunch and tickets to a matinee baseball game after scientists take the field to demonstrate scientific concepts in chemistry and physics. 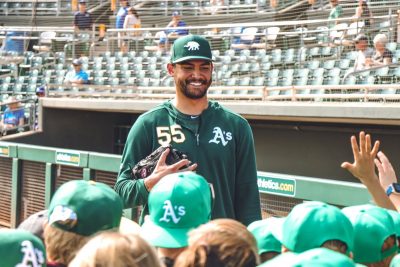 High school students interested in a STEM career will want to attend the Oakland Athletics’ Education Days. In addition to visits from current players and slingshot physics demonstrations on the field, students can meet with representatives from Bay Area universities, research labs and tech companies to make initial contacts and learn about the diverse fields that fall under the STEM umbrella. Seattle students can participate in the Mariners’ annual Weather Education Day, where nearly 4,000 local schoolchildren can tour T-Mobile Park before learning about Puget Sound’s unique weather phenomena from local meteorologists. 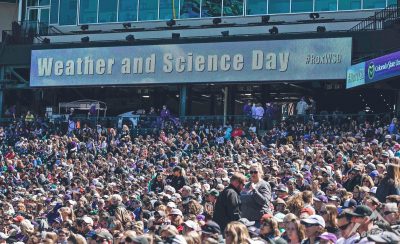 Hosted every April, the Weather & Science Day at Coors Field is a collaboration between the Colorado Rockies, Colorado State University, Steve Spangler Science and local news agencies. Students will learn about Bernoulli’s Principle through balloon inflation and how it affects fly ball carry, the Magnus Effect and its impact on curveballs and the “Coors Effect” of thinner air minimizing pitcher spin. Show-stopping demonstrations include the chemical reaction of water poured on liquid nitrogen and an Egg Drop Contest that requires student teams to design a protective covering for an egg dropped 60 feet from a weather balloon.

Students in the Phoenix metro area or Arizona Diaondbacks fans will want to consider the Science of Baseball and STEM Showcase, which welcomes over 5,000 annual participants. Exhibits include a robotic dinosaur from the Phoenix Zoo’s “Dinosaurs in the Desert” exhibit, giant replica planets from the Challenger Space Center, a reptile petting zoo from the Phoenix Herpetological Society and demonstrations from local high school robotics teams. STEM Field Day, organized by the Los Angeles Dodgers, invites local students to conduct supervised science experiments with former and current Dodgers players. The players will hit, throw and catch to demonstrate reaction time, geometry, trajectory of ball flight, torque and aerodynamics and how those concepts can be applied to other sports. Further south in San Diego, the Padres host the annual Science of Baseball program. Teachers are given lesson plans designed for students grade 5-8 that apply concepts of biomechanics, nutrition and reaction time and their real-world applications before embarking on a trip to Petco Park. There, school groups can participate in a two-day camp where they will discover the optimal angle for hitting a home run by launching baseballs with water balloon launchers, test their reaction time, calculate their own fielding percentage and participate in a whiffle ball game.